This tutorial will provide you with the additional tools you need to use Python in our second year courses. We will explore pylab (also called matplotlib), which uses numpy and the plotting packages of matplotlib.

1. Getting your work done with Pylab

In your second year courses, you will be using Pylab to get work done in a variety of ways. We tested Pylab in the First Steps, Part 2 tutorial.

Let's start with a look at the basics of plotting. Look at the following code:

This code will simply plot the elements of the list [1, 2, 3, 4] against the elements other list [1, 4, 9, 16]. The final command in all pylab plotting should always be "show()", which activates the plotting window.

Activity 1: Copy and save the excerpt above to a new script file, and run it in IDLE using F5. The result should be a window like this 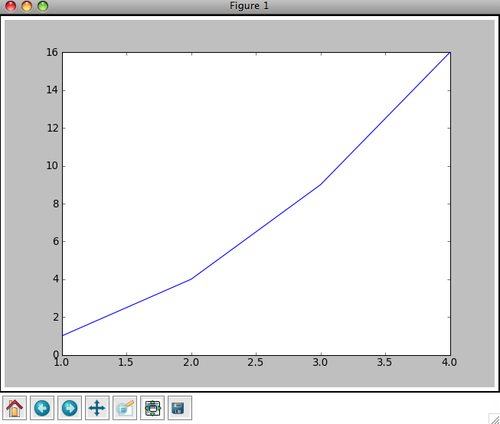 Notice the row of icons at the bottom of the window. These icons allow you to explore your plots by panning the plots and changing its settings. For more information on these buttons see the interactive navigation documentation at http://matplotlib.sourceforge.net/users/navigation_toolbar.html.

To learn more about the very powerful plot command, in the Python shell type
from pylab import *
help(plot)

The following activity will help you explore several useful capabilties of matplotlib.

Activity 2: Do the following:

The result will produce a session that looks like this, after rearranging and resizing the windows: 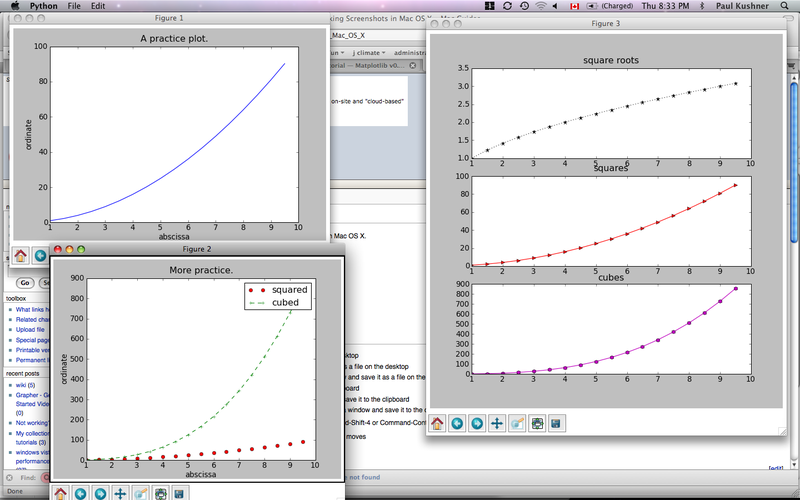 This code demonstrates a lot. It shows examples of:

Now that we have a basic idea of plotting, let's try plotting Lissajous figures. Suppose we have two independent sinusoidal time signals x(t) and y(t). A Lissajous figure is a parametric plot in the form (x,y) = (x(t), y(t)). Such figures are useful for plotting the motion of particles under the influence of forces whose x and y components are independent.

Activity 3: Do the following

Try running your code for various values of n and the phase constant. Use subplot to generate multiple windows, and save the output to a plot file. 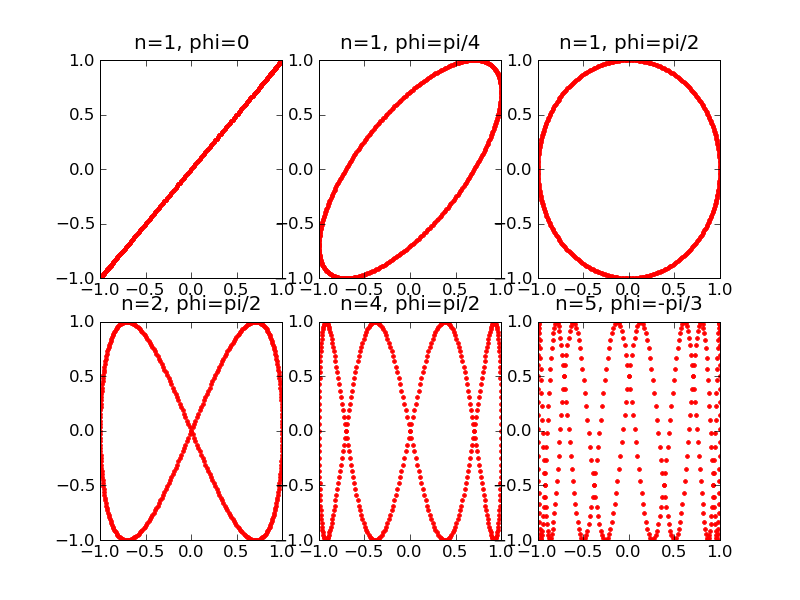 Now we will look at a different type of plot: the histogram, which has its own command hist. Histograms are useful to show, for example, how often various outcomes occur in an experiment.

Suppose you rolled a die 20 times and recorded the results in an array called roll. Copy and paste the following script into a new IDLE script window and run it to make a histogram: 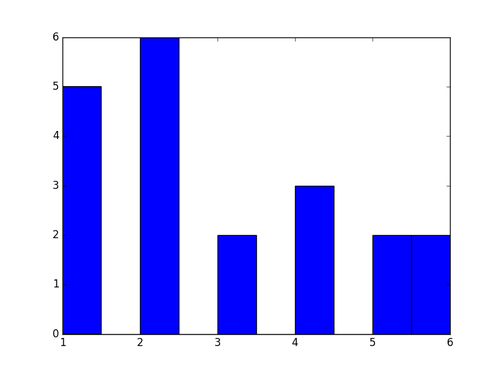 But there is a problem with this histogram: the binning, which python chooses automatically, is lousy. Inside the hist command, you can specify the number of bins immediately after the name of the array, and further change the binning using options such as range= , align= , bins= . You can then use the xticks command to control the labels on the bins.
You can also assign different weights to each bin, using the weights= option inside the hist command. For example, this allows you to "normalize" the histogram, to show you the probability of each outcome.
Try the following script to make a nicely-binned, normalized histogram: In the tutorial "First Steps, Part 1" we calculated the height reached by an object projected up from the surface. We worked with these lines of code:

You can execute these lines of code again to remind you of what they did. The last line gives

This number is hard to read and has far too many digits after the decimal place. To control this behaviour, we use formatted strings, which in Python requires tuples. Tuples are another type of sequence, like lists, but have a different structure and purpose. Here are some lines of code that define and explore the properties of a tuple.

A tuple is enclosed by parentheses () instead of brackets []. The elements can be accessed in a similar way to lists. But tuples are more hardwired than lists: you cannot change the elements of a tuple. For example, the assignment statement "my_tuple[3]=-15" will give an error (try it and see).

Now that we know a bit about tuples, let's see an example of a formatted string in Python

In the line beginning str, the %f are indicators that a floating-point number should be printed. The tuple (h, h_cm) after the % sign indicate the values to be selected. Now if we want to control the number of significant figures, we can use the following line to replace the str = line above:

Activity 6: Replace the string and run the new code.

This produces
The height is 8.0 metres or 797.2 centimetres.

The %4.1f strings indicate that each number should be at least four characters long and that at most one figure should be included after the decimal place. Other string-formatting codes, besides %f, are %s for strings, %d for integers, %g for floating point numbers in scientific notation exponential format. More information on string format codes can be found in our reference guide.

Activity 7: We'll repeat a prior example, produce cleaned up output, and plot the results:

We wrote the following to print out this solution: 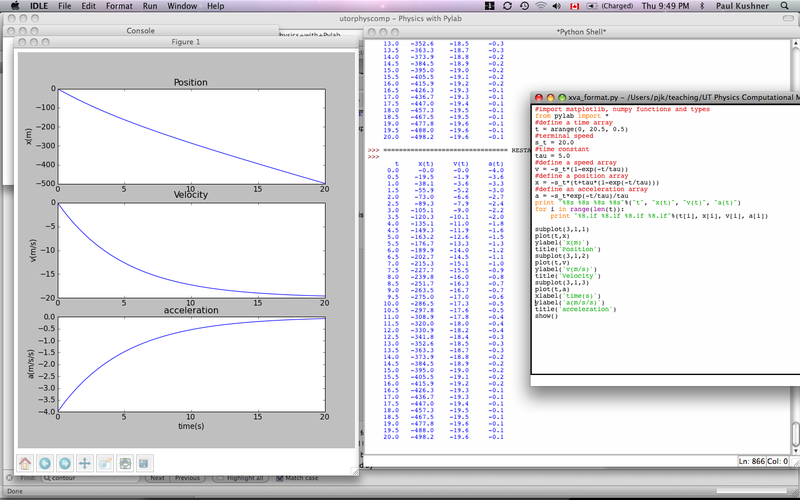 You will often need to output results to a file and read other data from an input file. We will show you a couple of tricks to get this done (ASCII output only) without dwelling on the details.

Activity 8: Writing output to a file:

Let's keep working with the falling particle example, xva.py. The following code outputs the x(t), v(t), and a(t) to a file called xva_file.txt. Because we will use the data in xva_file.txt as input into another code in the next example, we will output the data with up to 3 digits after the decimal place (see the %8.3f format strings below).

Now do the following:

Activity 9: Reading input from a file:

If you carried out Activity 7, you will have a file called xva_file.txt in your run directory. How can we read the data from that file? The file starts with a header line of text followed by rows of numbers. All entries are separated by white space. For files in this format (tab, whitespace, or comma delimited), pylab provides the very handy loadtxt routine. Now do the following:

The numpy module has very useful array indexing features and ways to manipulate the shapes of arrays. Try to reproduce the following session, including the error we made!

Given what we know about numpy arrays, we can now better handle pylab's loadtxt command. Here is the procedure to read in a comma or blank-separated ASCII file of values.

Here's this procedure in action

These equations represent the exact solution to the problem. But we also want to calculate these quantities numerically. To do this, we need to find numerical approximations to derivatives and integrals. We will use the simplest formulas to proceed.

with the approximation becoming more accurate as

gets smaller. So to find the position as a function of time numerically we start at the initial position x(0)=0 and update to the next time according to the approximate formula

and update to subsequent times according to

This is equivalent to finding the integral as a (right) Riemann sum.