This tutorial will take you through the basics of using Python 3 with the integrated development environment Spyder.

Here is an overview of the software we are documenting on this website:

We use a few formatting conventions to guide you.

2. Starting Python in the Spyder IDE

During a typical Python session, you will try Python commands interactively, and edit and run Python programs. In these activities, we will start a Python session and run a couple of simple scripts. These scripts are also used in the installation documentation.

Caution about opening .py files: Files that have the extension .py are known as Python scripts. On your computer, these files will appear to be "clickable", i.e. will appear to be files that you can open by clicking them with the mouse. We DO NOT recommend that you open these files by clicking on them. Why? Because quite often the result can be unpredictable. Instead, use the method described below: start Spyder and open Python scripts inside a Spyder session.

Activity 1: Now do the following: 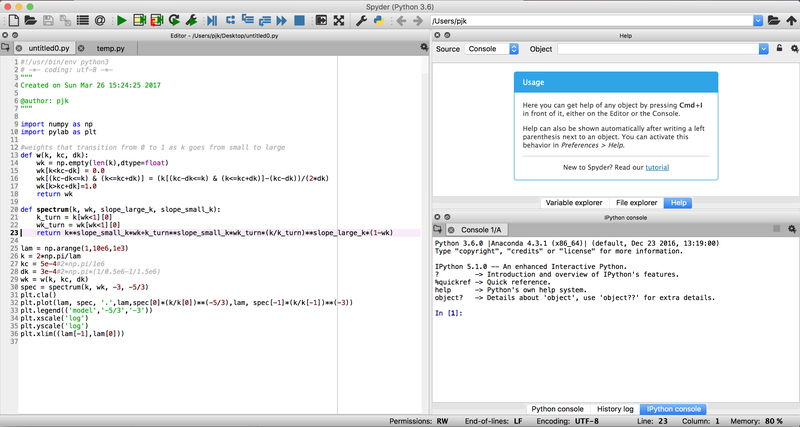 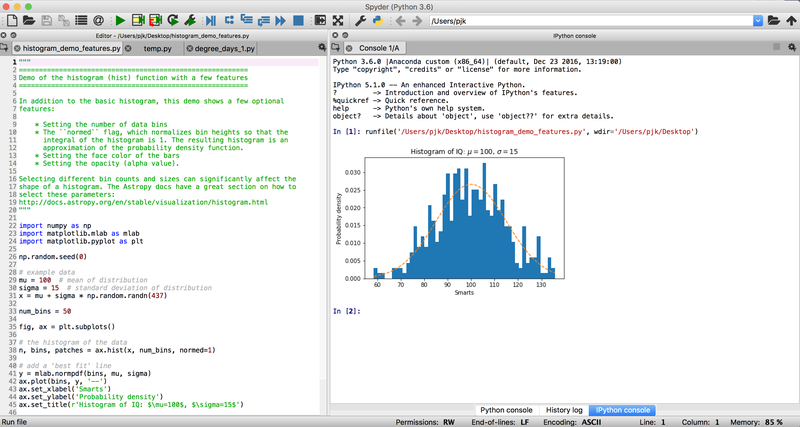 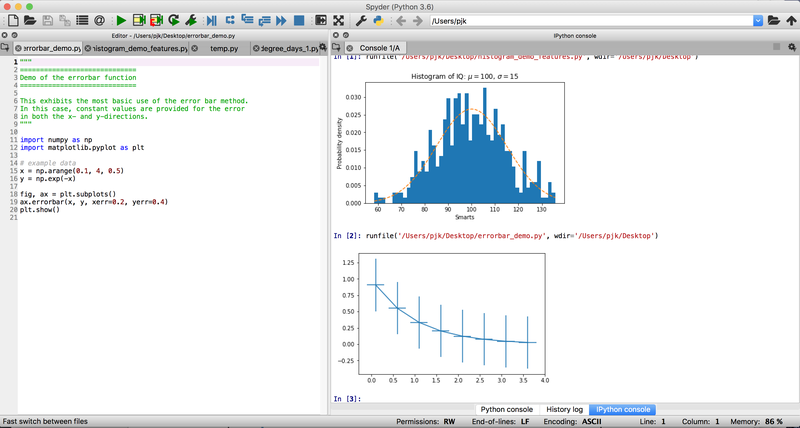 When you're done, go on to the next section, where we'll talk about using Python as a calculator and to test code on the fly.

A "shell" is a computer program that lets you work interactively with a program or an operating system using typed commands. The Console window in Spyder is a shell for Python commands. In the Python shell, you can enter commands for Python to process (or "interpret"). In this section, we will use the Python shell to do some calculations and other work interactively.

Activity 2a: Now do the following:

and press return, and you will see

(The Console will provide different colours to guide you.)
What just happened? The interpreter was waiting for a command, which you issued by pressing the return key after you typed the text. The interpreter read the command, which asked it to print out Hello Toronto! It didn't see any problems with what you typed, so it responded by following your command.

The "Hello Toronto!" that appeared in this example is known as a string, which is typically a sequence of characters enclosed by quotation marks (single quotes or double quotes). Strings typically represent information (data, warning messages, etc.) that are meant to be readable. For more advanced information about strings and print statements see Fun with Strings.

Activity 2b: Now what if you made a mistake? Let's see what happens by doing the following:

without the second quote and you will see something like

The interpreter complained (gave a Syntax Error) when it found the end of the command line (EOL) without finding the end of your string with the closing quotation mark. So even though it might have been clear enough to you what was wanted, it wasn't clear to the interpreter and so it didn't print out your command. But notice also --- and this is important --- that your mistake had no other consequences. It didn't destroy Python, or burn out the motherboard of your computer. So don't worry about making mistakes in programming. It just comes with the territory.

Activity 3 shows how the Python shell can be used as a calculator; you can scroll up and down in the shell session to look at the calculations you've done. The * is called an operator and there are many of them. We can do standard arithmetic, and a lot more. For example

The **operator raises a number to a given power:

The latter example took the square root of 4. You can use parentheses to group operations together:

You need to be careful with the order of operations you input, which follow Python's "precedence rules". For example,

calculates 3.0*5.0 first and then adds 2.0. It is a good idea to use parentheses to make things clearer, as the following examples show:

If it is helpful to you (or anybody reading your code), add parentheses to make your code clear. Even if you are sure the code works as intended without them.

Here are various examples of these operators in action

Activity 4: To test this behaviour do the following:

and check your prediction by typing the command.

and check your prediction by typing the command.

Now, let's write a little code to calculate a formula in physics. From first year mechanics, we know that an object projected upward with speed v will reach a height

in the absence of air resistance. Suppose you throw a ball with a vertical component of velocity of 12.5 m/s. The following calculates the height reached:

So the ball rises about 8 meters.

Another person looking at the statement In [18] in the previous example would have no idea what the calculation means. To produce clear work that anyone can understand, we need to use variables.

In these expressions, the interpreter assigns a value to v and g, and assigns h a value based on the values of v and g. The formula for h and the dependence on the variables are clearer now. The last line printed the value of h:

The variable h in this example refers to a specific number and not a symbolic formula. As a result, if you change v or g, the value of h won't change, even if we originally set h by a formula involving v and g. To see what we mean, try typing the following:

The point here is that h stays the same, even though v has been changed. To update h to reflect the new v, we need to repeat the formula:

Assignment statements can be chained together to update a variable without creating a new variable. For example, on my birthday, my age is increased by one year. The following commands would be good for marking my birthday.

Activity 7: Now do the following:

[Don't worry if you don't understand these expressions completely. Just take them as given.]

A sample session in which we solve this problem can be found in the following (prompts omitted):

We have been using Python interactively for these first quick answers and examples. Interactive shell sessions are nice for trying a couple of commands in a row. But if you need to chain together a sequence of several commands, as in the last exercise, it is much more efficient to save them to a file and use Spyder to run the file. A set of Python commands in a file is called a script. Like a movie script for an actor, the Python script tells the Python interpreter what to do and in what order to do it.

First, we'll introduce comments, which are lines of text that are ignored by the Python interpreter but that are included to help explain your code to others and to remind yourself what your code is intended to do. Good code writing requires good comments. Comments in Python start with a # sign. Any text following the # sign is ignored by the interpreter. For example, if you cut and paste the following command into the Python shell, the text after the this print statement will not be printed.

(Notice that the color highlighting in the code block makes comments appear grayed out. This is the type convention followed by the wiki software we are using; some people find the comments hard to read as a result.)

Activity 8: Now we will save some commands to a file and run the file as a Python script. 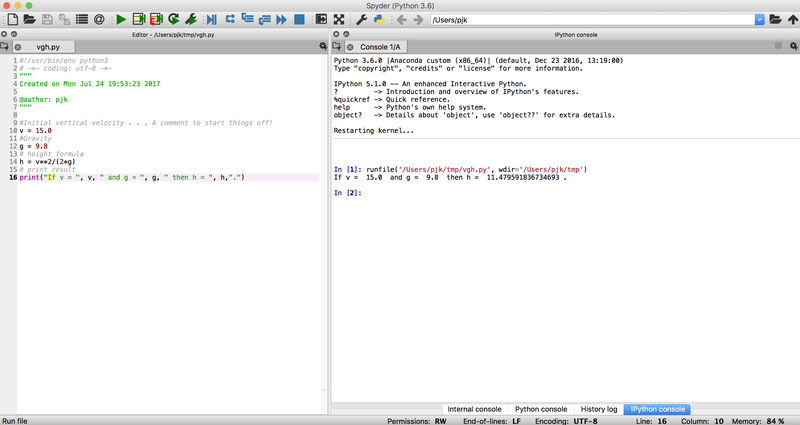 In the text editor frame, we've entered the commands and you can see that Spyder has colored the text using its syntax highlighting. (It does this in both the shell and file windows.)

The script consists of the set of commands you have already run interactively. We have added comments that start with # to help document the code.

When you selected Run or typed F5, several things happened. Run or F5 is a command that asks Spyder to translate (compile) the code into a form the computer can understand, load the translated code into the computer memory, and run the commands in the script one at a time in the order they are written. You as a user should understand the following about Run or F5:
1. Spyder will typically run each separate line in your script as a command. That is, the script executes all the command sequentially, in the order that they are written.
2. It skips every comment line in the script.
3. Once it is finished, it returns a prompt. This means that is now waiting for further instructions. You can now go ahead and type additional commands interactively.

Activity 9: Create and run another script for practice.

Mistakes, Bugs, Errors, Warnings: It is sad but true that most of your time in programming will be spent debugging --- finding and fixing coding errors. Strategies for debugging are covered here in the Python Reference, but this is a good point to say something about Spyder's debugging hints. You will find that when a code contains errors that are obvious, Spyder will try to inform you that it sees the problem and will try to identify where the problem might be. This will become more apparent as you start working with the text editor. If you pay attention, you will also see that the editor will provide hints for the next things you might type, etc..

Here are some questions about the all the material covered in this section (current links are for Python 2 documentation):
Part_1_Questions.pdf

This concludes Part 1. Now proceed to Tutorial Part 2, where you will learn more about Python commands and packages (modules).