We will be making a great deal of use of the array structures found in the numpy package. These arrays are used in many python packages used in computational science, data analysis, and graphical analysis (in packages like scipy and matplotlib).

Numpy arrays are a type of highly structured list that you can use for doing common numerical and matrix calculations.

To created numpy arrays, we first need to import the numpy module as follows: either

The first statement is preferable

Activity 1: Do the following

Enter the following commands one at a time and examine the output:

The output from the session is

Now do the following:

Suppose an object under the influence of gravity and resistive drag falls with a downward velocity \( v(t) = -s_t\left(1 - \exp(-\frac{t}{\tau})\right) \) where \( s_t \) is the terminal speed and \(\tau=5\) is a time constant. Write a program to write the acceleration and position of the object every half second for 20 seconds. Assume the initial position x(0)=0. (We will use this example to illustrate a few other ideas after we're done.)

Our script imports numpy and defines a time array t with the following line:

Another standard trick is to create a for loop that will run over an index that extends from the beginning to the end of an array. For example, to create a code that prints the elements of t[:] , we write

Now go ahead and produce a solution on your own, then check your answer against this script, which you can download and run.

Plotting figures is an essential part of using Python for physics research and learning. The main plotting package is python is called matplotlib. The odd name comes from the the fact that the plotting interface is modelled after the (non-free) computation program matlab. Matplotlib has evolved since it was first created and has influences plotting code for many newer plotting packages, like bokeh, plotly, ggplot (the Python version).

Matplotlib can be imported in a few ways.

The first import (matplotlib) imports the entire package, the second imports only the core plotting interface (pyplot), the third imports (pylab) a special package that includes plotting (pyplot) and numerical methods (numpy). One common way of importing matplotlib and numpy is to use

The simplest plot command is

This code will simply plot the elements of the list [1, 2, 3, 4] against the elements other list [1, 4, 9, 16]. Depending on your Spyder or Jupyter configuration, the final command in your plotting might need to be "show()", which activates the plotting window.

Activity 1: Copy and save the excerpt above to a new script file, and run it in Spyder using F5. The result should be a window like this 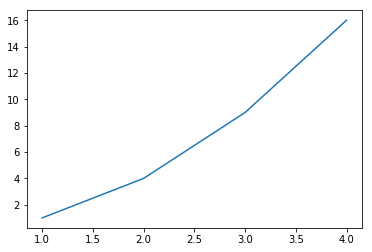 To learn more about the very powerful plot command, in the Python shell type

but, as with many matplotlib commands, the documentation is extensive and is helped by seeing examples of the usage. You can visit matplotlib.org to get the same documentation and see examples from the gallery.

The following activity will help you explore several useful capabilties of matplotlib.

Activity 2: Do the following:

Scipy, or Scientific Python, is the last package in this part of the tutorial. scipy is a collection of functions to perform basic scientific programming and data analysis. It is also the ecosystem for many other scientific packages and provides a consistent interface to the functions and avoids duplication. For example, scipy contains Fourier transforms (scipy.fftpack), and numerical integration (scipy.integrate). It also provides the core functions for machine learning (scikit-learn) and image processing (scikit-image).

For example, to integrate a list of numbers using scipy you might use a function called trapz (for trapezoid, the type of integration being used) from the integrate package.

Here, quad takes a function name (e.g. np.sin) and the limits of the integral, but no data points. Scipy then tries to integrate the function and returns two values. The first value is the answer, the second value is an estimate of the error in the answer.

Another common use for scipy is optimization using the scipy.optimize package. This is the package used to fit data to scientific models, or fitting values to polynomials. One way of fitting data is to use the curve_fit function, which takes at least three arguments

The data you give curve_fit could be collected from an experiment, for example. You can also give curve_fit some additional help if your function is particularly complex. For example

Activity 3: Copy and the code below into Spyder. What does it do? Run it and check the output.

The code does a few new things.

Curve fit always returns 2 things to you. The first (we've called popt) is the optimized values for the parameters. In this case the best estimate of values for a, b, and c. The second (we've called pcov) is the covariance matrix of errors in the optimized values. This matrix is square with the number of rows matching the number of parameters. The most important elements of the matrix are the diagonal elements that give you the variance in the estimated parameters, which you can use as an estimate on the size of error in your calculation.

A more complex example, might be to use a ball dropping in a vacuum to find the acceleration due to gravity. For this experiment the equation would be

This concludes the Part 5 of the tutorial. In summary:

We hope that this tutorial has helped start you on the path to doing physics with computers. Please speak to your instructor if you have any suggestions for how to improve this tutorial.